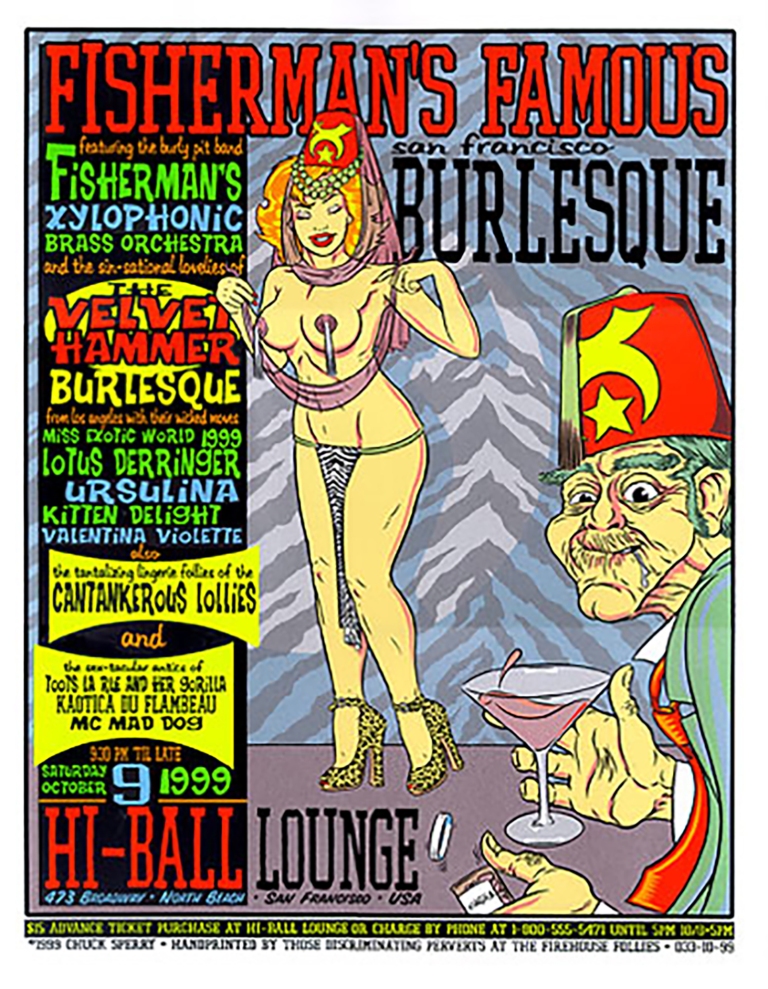 In 1997, Burlesque was an almost dormant art form, known almost exclusively by retro geeks, Drag queens, pinup aficionados and hot-rod/rockabilly gangs. From it’s heyday in the 30’s and 40’s when it is said that every American city with a population over 100,000 had a Burlesque theater, by the 90’s there were perhaps only a couple dozen young people performing the style scattered across the whole country, mostly in New York and Los Angeles. Dixie Evans at Exotic World in Helendale, CA kept the torch alive with the annual Miss Exotic World pageant when the dusty former goat ranch would come alive with international media and visitors gathering to watch Living Legends in sequins and feather boas re-enact their routines from back in the day.

It was in this environment that Brian “Fisherman” Lease, then playing vibraphone with “Lounge-core” pioneers, Frenchy, set out to produce a full scale live Burlesque show with all the elements his fevered imagination had culled together from old films, pinup magazines and thrift store records: a live band with screaming, growling brass horns, primitive drums and exotica laden vibraphone; baggy-pants comedian telling groaners with snare drum rim shots, crazy variety acts, go-go dancing, a guy in a gorilla suit, and of course the most exquisite, bawdy, and accomplished strip-tease artists to be found.

The result was a show at the Cocodrie Club in San Francisco’s North Beach called Tease-O-Rama, featuring dancers from LA’s Velvet Hammer Burlesque, which exceeded all expectations of success, followed by several years of sold out shows there and at other clubs and theaters around California. By 2001, there had been such an explosion in the “Burlesque revival” that producers Baby Doe Von Stroheim and Allison Fenderstock re-purposed the name Tease-O-Rama for a 3 day convention in New Orleans at which hundreds of Burlesque performers from all over the world performed. Fisherman’s Famous San Francisco Burlesque head-lined Saturday night.

Later that year Fisherman moved to New York City, the hottest spot in the country for what was now called Neo-Burlesque, and quickly became a major player on the scene. Appearing almost nightly at places like The Fez, The Slipper Room and Coney Island’s Burlesque at the Beach, Fisherman got to play for the biggest names in town; Dirty Martini, World Famous *BOB*, Julie Atlas Muz, Bunny Love, Bambi the Mermaid, Tigger , Jo Boobs…the list goes on…as well as work in musical theater (Homo the Musical), film scoring (The Yakuza and the Mermaid, Tiddledy Winks), and side work drumming for rock stars (Jane County, Nina Hagen).

Fisherman was the house band leader for the first five years of the New York Burlesque Festival, toured with the World Famous Pontani Sisters “Burlesque-a-pades” and had the honor to accompany some of the most famous living legends including Tempest Storm, Dixie Evans, and Kitten Natavidad. He also led his own Tiki-themed band and curated the longest running show (2001-13) in the Burlesque at the Beach series at Coney Island called Fisherman’s Love Luau.

In 2016 Brian “Fisherman” Lease was inducted into the Burlesque Hall of Fame in Las Vegas with his receipt of the Sassy Lassy Award for contributions to the Art of Burlesque. He currently lives in San Francisco and is a gardener for the City of SF Public works. On November 30 2017, Fisherman’s Famous San Francisco Burlesque will be presented at The Makeout Room, marking the 20th anniversary of the show and including several original band members and performers. It will be the first itineration of the show in SF in over 15 years.

As of this writing there are thousands of Burlesque performers working hundreds of shows a week in the US alone, with untold more all around the world.

This is a text widget. The Text Widget allows you to add text or HTML to your sidebar. You can use a text widget to display text, links, images, HTML, or a combination of these. Edit them in the Widget section of the Customizer.

This is a text widget. The Text Widget allows you to add text or HTML to your sidebar. You can use a text widget to display text, links, images, HTML, or a combination of these. Edit them in the Widget section of the Customizer.